This is the first in a new series of weekly posts which I plan to publish,  briefly summarising my training from last week and plans for this week. Hopefully this will also tie in with some upcoming articles about my wider training plan for 2015, to give you a flavour of how I approach my training and juggle it with other commitments.  The other reason for publishing this, is I am really hoping it will keep me honest and push me out the door on those occasions when I just don’t fancy it.

The vast majority of my workouts are published through my Strava, Runkeeper and Movescount accounts. The later is sometimes a little behind as it depends when I synchronise my Suunto Ambit 2.  Where applicable I have also provided direct links to specific workouts on Strava  should you wish to see more detail on some of the workouts from last week below.

OK so lets get into it… 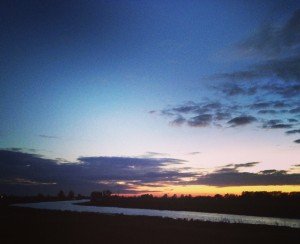 For last few weeks I have been steadily building my run mileage back up after suffering issues with my ITB and TLF in my right leg. Things have been progressing well and my aim was to make this my biggest week yet, with a total run mileage of over 60km, ahead of a weeks enforced rest following a small surgical procedure I will be having. There was no cycling or swimming, as work and family commitments didn’t allow it. As always I kept up with my core work through-out the week.

Last day of the holiday, so headed out for a long run ahead of this weeks road trip. This time to the south of Ely, extending an old favourite with a couple of new trails. Legs felt good. A couple of minor twinges on starting after stopping to take photos but they quickly passed. Very strong head wind heading out but had benefit on homeward leg. Nice and easy, keeping HR around 140bpm. Had to break out the headtorch for final few km back into Ely but finished strongly.

Long day at a work conference, so ended up taking a rest day

14km trail run at dawn, along the Grand Union Canal in Birmingham

Away with work, so hitting the canals for a great morning run away from the city traffic. Muddier than expected, so road shoes weren’t the best choice. Easy out for 7km, tempo 4km at half marathon pace back followed by easy 3km to finish. Right hip felt a little tight but eased with run.

Full core and flexibility session in the morning

8.5km run home from the office in Ely

End of the week, so usual run home. Shorter than planned as commitments at work, nice and easy the long way around ahead of tomorrow’s long run.

Set off on XC tour of the villages, following my nose and checking out a couple of new trails. Got carried away so had to cut run short and turn on the afterburners to get home by 10am. Abandoned trails and hit the pavement back up A10 to ensure I made the target. Made it with 2 mins to spare after tempo running last 7km.

Full core and flexibility session in the morning. Had planned an evening run but as I’d already hit weekly target of 60km, decided to bin it.

As already mentioned, I have been slowly ramping my run mileage back up following injury, in preparation for Peddars Way Ultra at the end of January 2015. This week I have a small surgical procedure taking place, nothing major but it will mean that I will have to totally rest for a number of days. Its unclear how long this will be at this stage but I’m assuming at least a week from running, two weeks from swimming and probably longer from cycling.

The plan therefore is to try and load as many run miles in ahead of the op and use the time off as a recovery week before building again. Following the op I also plan to shift to ten day training cycles instead of weekly but will use the time off next week to plan this in more detail.

So the plan for this week is to try and hit as close to 50km run mileage in the next three days, broken down as follows: