One of the questions I regularly get asked is what trail running shoes I would recommend? The simplest answer is to suggest they head to their nearest running store and try a range on, as what works for me won’t necessarily work for someone else. Foot size and shape, combined with running style and form, all contributing to the choice.

However what I thought may be useful is to give some feedback on the shoes I use and the plusses and minuses that go with them. While I would still recommend you try them for yourself and get a proper fit, this may give some guidance on the different brands to look at and also provide a semi interesting read in the process.

To date I have primarily used the Salomon XA Pro Ultra 2 (now discontinued) as my trail running shoe of choice, combined with a number of other shoes for muddier trail, road and racing. I am a huge fan of rotating shoes to give variety and build foot and ankle strength.

As the XA Pro Ultra 2’s appear to be no more, I am keen to expand the range of trail shoes I have in my armoury, especially as my mileage on trail has increased significantly in the last twelve months and now forms the bulk of my running. There are also a number of different shoes and brands that I’ve heard a lot of good reports on which I am keen to try out.

So rather than write reviews on the current shoes I own and use, why not add some more into the mix?

What is the idea?

It’s pretty simple really. I’ve pulled together a range of shoes, some familiar to me, others less so and over the course of the coming months I will run in them all across various terrains and feedback here on my thoughts.

This isn’t scientific, just my thoughts and experiences on running in these shoes. Remember a proper shoe fit/gait analysis by a qualified professional (emphasis on the word qualified!) is always adviceable, especially if you’re new to the sport. Hopefully you can still get some useful titbits out of my ramblings over the coming months which will help you in your purchasing decision.

My feet and I

First things first, what kind of runner am I and what are my feet like?

Well I am 185cm tall, weigh around 78kg and have size 11 feet which are pretty broad. So shoes with narrow toe boxes are a complete no no for me!

Running wise then I would describe myself as a high cadence mid foot striker. While I try to get up onto my toes it seems mid foot is where I want to be, especially when ultra runnning.

Finally in terms of weekly mileage then I typically fall within the 50-80km range depending on where I am in my programme, with at least half to two thirds of that off road.

As previously mentioned, I was keen to try some new shoes which I’ve heard lots of good things about as part of this test. I was also keen to introduce a number of shoes which had a lower drop (difference in height from heel to toe) than I have been previously used to.

The list I therefore came up with consists of the following shoes: 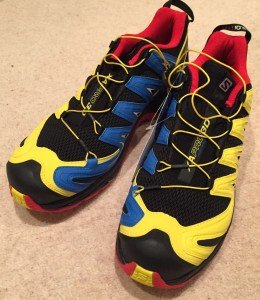 Normally I wear the now dis-continued XA Pro 3D Ultra 2’s but the XA Pro is pretty much identical but with a few twists, many of them not obvious at first glance.

At this stage the only ones I can pick-up are a subtle difference in the compounds used in the sole and also the way it wraps around the foot within the shoe itself.  I am sure there are a few more I will identify as I go along and will report back on what I find out.

I have run in the XA Pro 3D Ultra 2’s for years and wore them for my first official ultra, so was disappointed to see Salomon drop them from their line-up in 2015.  I do however have high hopes for these as a direct replacement but only time will tell. 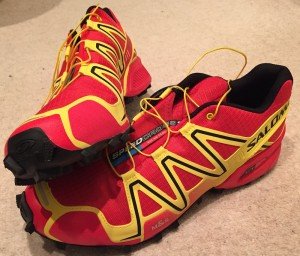 Typically the first port of call for a lot of people new to trail running.  They are lighter than the XA Pro by around 100 grams, have a more aggressive sole and also a lower drop (difference in height between heel and toe) to give you a closer feel for the trail.

I am already familiar with these as they are the shoes I have previously used for really muddy conditions, as they tend to have better grip than the XA Pro’s in these conditions. 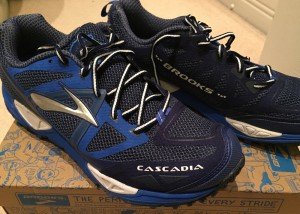 I do all my road running in Brooks, using the classic Adrenaline GTS range for training and Racer ST’s for races. It seemed logical therefore to try out at least one of their brands of trail shoes, with the Cascadia being raved about by a lot of people online.

So my first new shoe.  These come in a similar weight to the Speedcross 3’s from Salomon but look more like a traditional shoe and I look forward to giving them a go. 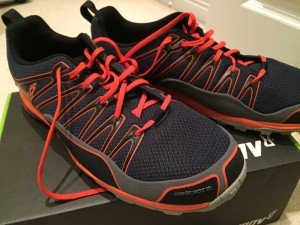 Not just a new shoe but a totally new brand but one again that I have heard a lot of positive murmurings about.  Renowned for their minimal style shoes and wide range of weights and heel drops within models, there are a lot to choose from.  I have previously tried a few of their shoes on and found them too narrow for my feet but I managed to pick up a pair of Trailroc 255 in size 11.5 and they seem to fit really well.

These are even lighter than both the Brooks and Salomon shoes above and with a drop of 6mm will be a new low for me, so I will need to take time getting used to running in these.  They feel like slippers on, so again am really looking forward to getting them out on the trails. 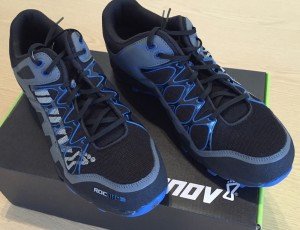 Finally I also picked up a pair of Roclite 315.  More comparable in weight to the Salomon and Brooks and a slightly higher drop than the Trailroc at 9mm.

Inov-8 state that these are the “ideal entry level shoe for someone wishing to move towards a lower drop”. That sounds perfect to me and will probably be the shoe I focus on most before moving onto the Trailroc later in the year.

So there we have it, those are the contenders.  There were obviously loads of other shoes which I could have easily added to the list but at the end of the day budget and time meant I had to keep the list to a manageable number and this seems about right to me.

Next steps are for me to get out and run and over the coming months I will report back on how I am getting on with each shoe and hopefully give you a feel for what I like and dislike about them.  Later in the year hopefully I can pick one which I think is the best, although I have a niggling suspicion there may be more than one!

I’d be interested to hear other peoples experiences with both these and other trail shoes, so be sure to share your views in the comments below.

Right, time to get running!