The 31st December 2014 saw my final race of the year, and I believe the final official race in the UK, The Ely Runners New Years Eve (NYE) 10km.

I’ve ran this race twice before, the only other times I’ve run a 10km race. Both times I’ve been extremely disappointed with my time and I was therefore determined to get it right this time around – third time lucky and all that. Put simply, this time I intended to race rather than run! 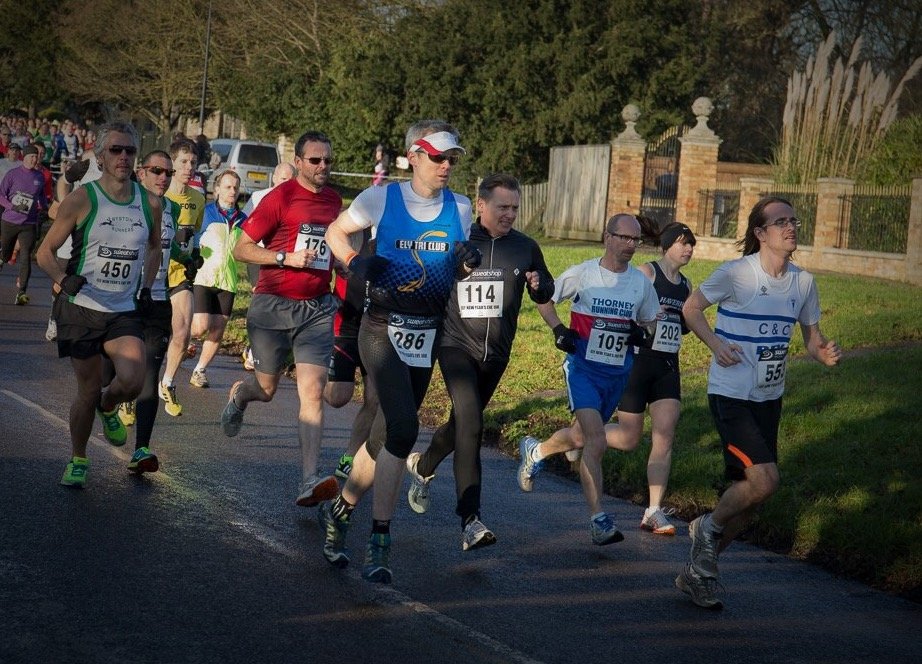 As was the story of my year to date, my build up was largely based around long endurance runs with little speed work. I did manage to squeeze a few tempo sessions into the final weeks before the race, including a long 8km tempo effort as part of quick ten miler a few days before. It was a risk doing this so close to the race but it did wonders for my confidence. I just hoped two days total rest before the race should see me firing fit and fresh at 11am on NYE.

My aim was to run sub 42 minutes, a time which would shave 2:50 off my previous PB (if you can call it that) and be closer to the time my other race results suggest I should be able to do. I still believe a sub 40 is in me but that will require a decent block of speed work, so was going to be a real long shot for this race.

My plan was to run by pace, with an average of 4:10 per km bringing me in under 42 mins, a 4:05 average for under 41 minutes and of course 4:00 for the elusive 40 minute barrier. The other thing I wanted to ensue was that I had a good warm-up, so opted to run the 5km to the race start from home at an easy pace.

The course is a fairly flat and exposed road circuit, out from Little Downham, across the Fens to Pymoor and returning back into Downham with a cheeky little hill just before the end. The wind can play a factor, especially on the return leg but this year it was the risk of ice that was occupying my mind.

As I was running to the start, I needed to walk out of the house with the correct shoes on for both the run to the race and the race itself – unfortunately my pack didn’t have the space for a second pair of shoes. My first choice, my racing flats, while light don’t have the best grip in the world. My trail shoes while not exactly weighing a tonne do come in heavier but would provide better grip.

On the previous Sunday I’d had to postpone my long tempo run first thing in the morning due to ice and that was despite trying both pairs of shoes. While the weather was forecast to warm by race start I decided to er on the side of caution and wear my trail shoes out the door, figuring worst case scenario this would loose me 30–60 seconds but would at least see me around the course if it was icy in places.

As it turned out there was little or no ice on the route so my flats would have been fine. Oh well, good to know there is time in the bank to go quicker in the future if need be 🙂

I met a club mate (Kyle) and together we ran out to the start. I was glad of the run as my legs felt very heavy for the first 2km’s, probably as a result of Sunday’s session. This eased however and we were soon at the start, race numbers collected, chatting to other members of Ely Tri Club and trying to stay warm!

Having taken part in the race before I knew how important a good position was at the start, to ensure you weren’t boxed in for the first 500m or so. I left it pretty late to join the other athletes but finally stripped off my extra layers and managed to squeeze in a few rows back from front.

As usual the first kilometre or so flew by, due to it being downhill and everybody full of adrenaline. I went with it this time knowing I was putting time in the bank which I may need later, on the return leg into the headwind.

I was passed by club mates Alan and Kyle within the first km and we exchanged a few brief words. They were aiming at or below the 40:00 mark so I expected to see them disappear into the distance, which they duly did.

By 2km though I was still well under a 4:00/km average and suddenly I wondered if a sub 40 was on. How wrong I was! Once the course levelled out I settled in bang on 4:10 pace, which with the time in the bank meant I was comfortably on for my sub 42:00 target.

The number of people passing me slowed to a stop by the 3–4km mark and throughout the race I was consistently passing people myself. Where as previously I may have sat in with a group I believed were running at my pace, I instead focussed on myself and pushed on bridging from one group to the next and gaining places with every move.

At the half way point I was comfortably holding sub 42:00 pace but knew the hard part was yet to come as we turned south for the second half of the race, predominantly into a head wind.

This year the wind was lower than previous years but it was still there and you had to up the work rate to hold the target pace. I was definitely glad at this point I’d worn both my sunglasses and visor as we were also running straight into the blazing sun. 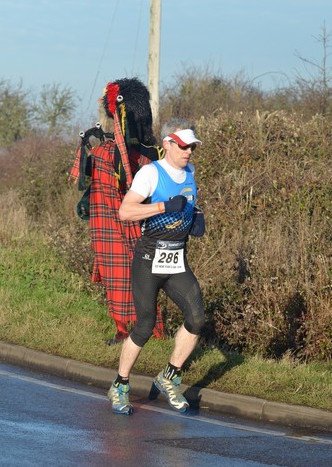 Passing The Piper at The Top of the Hill

In the 8th kilometre there is a slight drag uphill, after which its a flat 1200m to the finish. My usual tactic is to hold a steady pace up the hill and then let it all go for the final run into the finish.

As I passed through 7km I became aware that my pace was dropping slightly. Rather than increasing the effort I decided to hold where I was, save the effort for the hill and rely on a strong final kilometre to pull the time back. It worked beautifully!

As we hit the bottom of the hill two people I’d been running closely with started to pull away but I focussed on keeping my effort consistent and not over cooking it, conscious there was still a mile to go. As we crested the top and passed the bagpiper who was piping us up the hill (a standard feature of this race) I slowly upped the pace, pulling back in and overtaking my two companions.

From here it was a case of ramping the pace up and not looking back! Unlike previous years I soon hit my top limit, which was pleasing in a way, as it showed I’d paced the rest of the race far better than usual.

The finishing location had been changed since last time I ran the race in 2012 and I had forgotten to check it out before the start. That and the fact it was both icy and muddy on the approach meant that my usual sprint finish had to be left in the locker for another day. 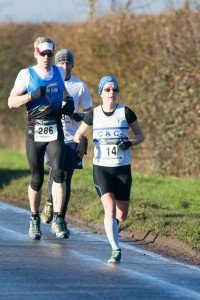 Driving for the line

Turns out I’d been reeling Alan from The Club back in, as he was only a handful of seconds ahead of me at the finish, but had totally failed to spot him as I focussed on the poor ground conditions – oh for that sprint finish!

I was and still remain super happy with the result and the approach I took to the race. Great also to know there is more time to gain through more focussed training, use of appropriate footwear and a better finishing surface. Game on for sub 40 I say!

All that remained was to collect our kit, wish all our club mates a happy new year and take an easy run back to Ely. Legs felt great, so I extended my return by a few km’s to bring my total mileage for the day to over 22.5km with a new 10km PB.

Huge thanks to all our team mates who stood in the cold and cheered us on, especially Sandie and Nadia for taking care of my kit while I ran. Thanks also to Kyle for the company on the run there and back, am sure your sub 40 will come quickly in 2015.

Finally a big thankyou to Ely Runners for putting on an excellent race, smoothly run and with enthusiastic marshals throughout. Ely Runners NYE 10km is a great race to finish off the year and I’d highly recommend it to everybody.

Hopefully see you on the start line in 2015!