Welcome to my training report for the two weeks commencing 2nd and 9th February 2015. Part of a series of weekly reports, briefly summarising my training during that week and plans for the following week. You will find the vast majority of my workouts published through my Strava, Runkeeper and Movescount accounts. Where applicable I have provided direct links to specific workouts on Strava below, should you wish to see more detail on them. OK so lets get into it…

As you would expect, the focus has been 100% on recovery in the last couple of week since the The Peddars Way Ultra Marathon.  As outlined in my race report, my legs and quads in particular were pretty sore after the race and it wasn’t until the Wednesday evening that I felt up to sneaking into the hotel gym and spending an hour on the cross trainer, bike and in the pool.   My legs were still pretty tired, so I left it a full 8 days before I tried to run, finally heading out on Sunday 8th for an easy run.

After a slow start my running has come on quite quickly, back up to just over 50km running last week.  I still have some odd aches and pains, pointing to my quad issues possibly being as a result of another underlying issue.  I have a physio appointment scheduled for this week to try and pin point this a little further and hopefully get me set for my next block of training

Assume it was mostly rest for the majority of the first week, so we’ll pick up the story from my first run back after the race.

No run streak over, Ely!

First run back after 7 days off running since last weeks race. Chose my favourite trail to do an easy out and back to celebrate. Legs felt very heavy but eased progressively through the run. Never perfect but obviously benefiting. Quads started to feel a little sore towards the end but nothing like in the race. Another week of easy workouts, going by feel I think. 0 °C, WC: -3 °C, 9km/h WNW, 93% 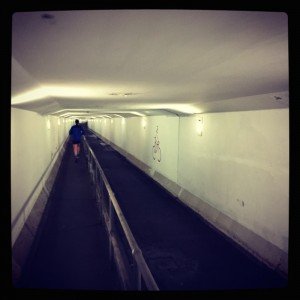 Running under The Clyde, Glasgow

Easy out and back along the Clyde, with the bizarre experience of running through the Clyde tunnel. Security gates at each end gave it a prison like feel and the very low ceilings ensured you kept good form to avoid cracking your head. Great fun! Legs felt less heavy than yesterday but kept it short so as not to over do it. 7 °C, WC: 4 °C, 13km/h W, 87%

Running legs are slowly returning, so headed out for a nice easy run along the Leith cost making the most of the lighter evenings. Felt pretty good. Right calf had a slight spasm but this cleared after quick stretch. Selfish dog owners meant I ended up with dirty shoes towards the end, which took me half an hour to clean in my hotel room shower but still stinks. Great run, $hitty finish. Thanks! 5 °C, WC: 1 °C, 20km/h WSW, 87% 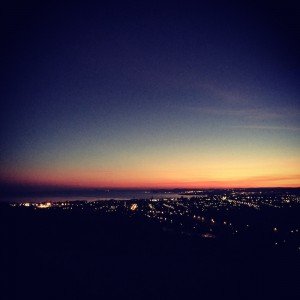 One of my favourite runs, a spin up, over and around Arthur’s Seat in Edinburgh before heading back to the coast. Love it! Dark when off road, so took at head torch and got yo enjoy a spectacular dawn along the coast. Legs felt great, with just a slight twinge in right hip on final approach to the hotel. Plenty of photo stops, so definitely a nice easy morning run but legs feel like they’re coming back. 0 °C, 0km/h SW, 93%

Pushed for time, so headed off on ten mile loop. Pushing comfortably hard and running by feel. Looking at stats afterwards provably ended up in no mans land HR wise but still a worthwhile experiment. Felt pretty good and my cold was flooding out of my nose. Held a fairly consistent pace, pushing harder on the hills when they came and recovering on the downhills. Slight tightness in right hamstring at around 12km but soon passed. Felt a little chesty afterwards but nothing noticeable while running. 4 °C, WC: 2 °C, 6km/h NNE, 97%

Focussing on the last seven days, there was 4 hours and 34 minutes of training, with a TSS of 494.0 and total distance of 54.5km broken down as follows:

I am feeling pretty well recovered from The Peddars Way now, so will continue to look to build the run mileage back up and also seek some professional advice on the quad issues and other aches and pains that are lingering on.  I am on holiday for part of this week and its also my birthday, so am sure I will take the opportunity to get some nice long runs in.

I have a loose plan but will be happy to flex it around family commitments and how my body feels.  At the moment it looks as follows: