Long time no run, time for a Plan B and C!

Well for those that follow my blog you will have noticed that since The Hardmoors 55 I have been conspicuous by my absence. This was totally unplanned I assure you.

Following the race I took my usual easy week to recover. A short 5km while in Edinburgh showed that the legs needed more time but by the following Monday I was ready to get back out there. I continued to run by feel but still managed to enjoy a few local outings plus a longer trail run while away in Bristol on work and also a nice tempo run while in Devon.

However after Easter things took a downhill turn. Sickness came into the family home through our children and while I initially managed to avoid it and even squeeze in a couple of runs, they didn’t feel great. While I had hoped I would avoid the worst of it, the virus finally managed to drag me down a week later and that was it! 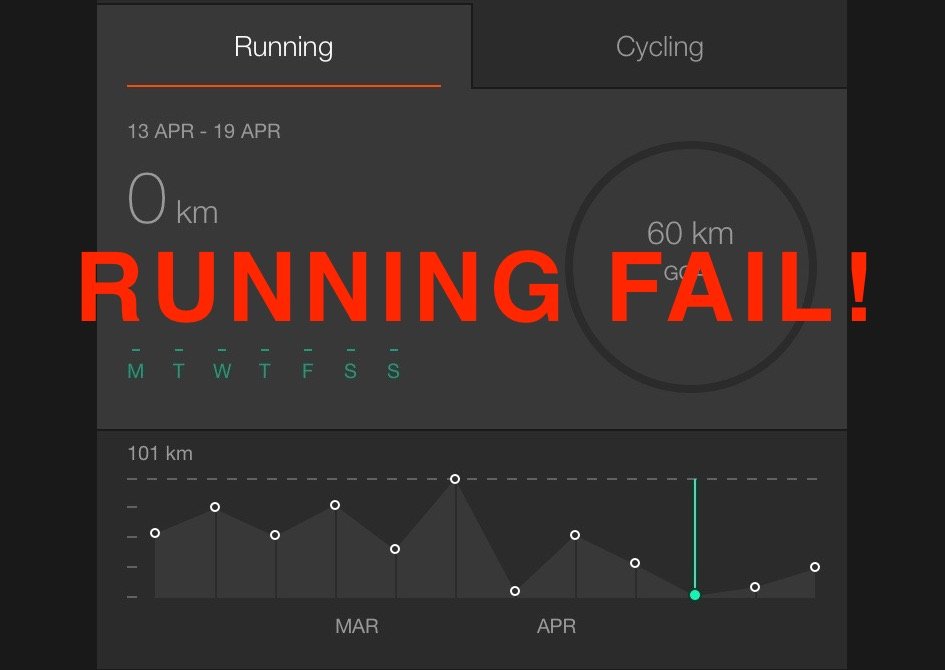 Running Fail!
Since then I’ve been struggling to shift it, with the Doctors finally putting me on antibiotics this week. Twice I dragged myself out of my sick bed and back to work, only to end up feeling terrible a few days later. Running was totally off the agenda for two full weeks before I felt well enough to give it a go.

It felt great to be back out, even for a only a short run. However the next morning I felt terrible again, so the running shoes were firmly back on the shelf.

Again this week I felt better and even managed two runs on consecutive days. However as I write this its the third day and my chest feels pretty heavy again, so once again I am taking a break and hoping it clears.

The major issue is that my next race is now looming firmly on the horizon. By now I should be into my taper for the North Downs Way 50 on May 16th but instead I sit here still not feeling 100% and with little or no training under my belt since theHardmoors 55.

And so Plan B has been formed!

There is no way I can recover and get enough training in to be able to perform the way I would hope at the North Downs Way 50. However all is not lost!

When I started looking at my training for both this race and my following race, the Norfolk 100km, I realised that I only had four weeks between them. With one week recovery from the first race and a two week taper into the second, this would only left one clear week to train in between, if at all.

So Plan B is to treat the NDW 50 as part of my training for the Norfolk 100, think of it as a catered long training run. Norfolk 100 becomes my A race and the NDW 50 goes from being a race to an “easy” long run. Gone is the need to hit any time objectives, its easy running getting miles back into my legs. The secondary objective is to finish and gain the 2 UTMB points on offer.

The key aim is to minimise the recovery time required after the NDW 50, so I can quickly get back to training, with a focus on speed work. Hopefully this approach, combined with a decent taper should see me at the start of the Norfolk 100 fit, fresh and ready to race.

Its still less than ideal but it does at least give me the opportunity to take part in both races, have fun and bag the UTMB points on offer. This does of course still rely on me recovering from this illness quickly, allowing me to get some decent miles in over the next ten days, so the NDW 50 is not such a shock to the system.

Which brings me onto Plan C. Yes there is one and if I can’t recover quickly enough I may well have to consider withdrawing from the NDW 50 altogether and focusing my efforts on the Norfolk 100. As always time will tell and while I really want to race in a couple of weeks, there is little point if I’m neither fit or well enough to complete the course. To do so could even put the Norfolk 100 at risk!

So while I admit I am feeling extremely sorry for myself as I sit here writing this, its still good to have some semblance of a plan before me. I’m into my daily core sessions again, trying to build strength back into my core and legs. I also hope to get back onto my turbo trainer over the weekend, as a way to try and get some endurance back into my legs without putting my cardiovascular system under significant stress.

The Road Ahead is Ultra Long and also a Little Confusing!