I can’t believe it’s only been a year! Since that race I’ve run three more (Peddars Way Ultra, Hardmoors 55 and Norfolk 100) and also had some wonderful running adventures across the country. There have been highs and some lows but most importantly I’ve learnt so much about myself, the ultra running community and what I’m capable of as an individual.

After years of taking part in a wide range of endurance sports I’ve definitely found my spiritual home in ultra running, probably for the first time since I gave up mountaineering regularly. The races and community around them are unique and a far cry from the adrenaline fuelled competitiveness of something like the triathlon scene.

Gone is the need to treat every race as a “me against everybody else” smash fest, constantly striving for PB’s or that next age group placing. What I’ve found is that ultra running is a personal journey and challenge, through which you will make some great friends and memories along the way, many of which will stay with you for a lifetime. 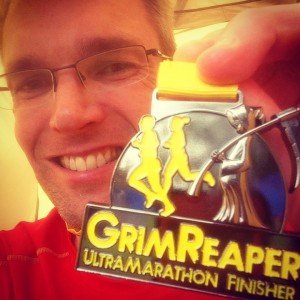 Giles with finishing medal for 2014 Grimreaper Ultramarathon
Yes they’re still races but mostly races against yourself. I appreciate there are others that would treat them otherwise and good luck to them, everybody has their own motivations – to each their own and all that. For me however there is nothing better than the simplicity of pulling on your shoes and heading out on a new route in a fabulous location, be it in a race or a training run.

So as my first year comes to an end I look back with a sense of achievement at what I’ve discovered and excitement about what lies ahead. While this is the end of my first calendar year as an ultra runner there are still races to be run this season and plans to be made for next.

I’m already drawing up plans for next season and beyond and I’m definitely relishing the challenges ahead. There will probably be a slight shift of focus, still ultra running but with a twist. Nothing to share at the moment as a few things need to drop into place but when they do I’ll be sure to share them here first!

I’d like to say a huge thanks to my family for their support and tolerance over the last year and giving me the space and time to enjoy this sport. Also thanks to all those that I’ve met and run with in the last twelve months. It’s been a total blast and I look forward to many more running adventures together in the years to come.

To close I’ll leave you with the following gallery of some of my favourite images and views taken during my runs over the last twelve months. The opportunity to get back into my photography has been another joy of the last twelve months and I’ll hopefully be boring you with many more over the months and years to come. If you want to see all my trail and ultra running photos as I publish them, then head over to my photo blog – View from The Trail – ultrarun.photos.

Right I’m off for a long run …

The Ship of The Fens – Ely Cathedral

Dawn in a Snowy Cairngorms, Highlands

Frosty Out and Back Footsteps

Running under The Clyde, Glasgow

Giles at Finish of The Hardmoors 55

Views along The Cleveland Way

Runaround Scorrybreac on Isle of Skye

Giles, Karen and John approaching the start of The Shingle Bank

Heading out on The South Downs Way from Buriton Church

Sunset over The South Downs Way

Running around The Lake at Clumber Park

Heading across the fields at Clumber Park