Well we’re into the final two weeks of the year and – maybe more importantly! – the final four weeks before my next race, The Spine Challenger – gulp! As its been a while since my last update, I figured it was worth a few putting a words down about how things have been going with my training and also what my plans are for the coming weeks. 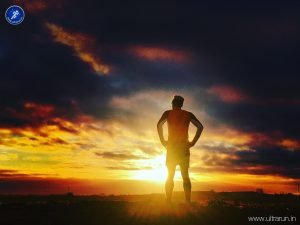 Enjoying a Fenland sunrise
Lets start with the training. When I last wrote an update I’d managed to get a months solid training into my legs, following 4-6 weeks of rest and easy running after Lakeland 100. Heading into November things were continuing well, I was feeling great and the metrics showed I was the fittest I’d ever been, which was good for morale.

All good things must come to an end though and cue our boys and the winter vomiting bug! Yes that’s right, illness crept into our house, or rather ran through the door in the form of our gorgeous children 🙂

As one by one my family succumbed to the bug I waited with dread for my turn. I’ve never taken so many vitamins and washed my hands so much in my life! Fortunately, although I did feel nauseous for a few days, I was never actually ill, was able to keep running and even managed to become the first Brit to finish the Ashmei 100 mile #govember challenge at the start of November.

Things were looking good and maybe I’d manage to avoid it! Oh no! Our youngest then developed a cough and bam, next thing I knew I was wheezing like a goodun, had developed a bad chest infection and was onto a massive course of inhalers and antibiotics. Common sense prevailed and I put myself on total rest while I waited for it to clear. Ten days and two courses of antibiotics later I was once again tentatively heading back out of the door to try and get my legs moving again.

It was groundhog day, a total replay of what had happened back in June, when I was struck down by influenza. While extremely dis-heartening, I did at least have the confidence that I’d been able to recover and still finish the Lakeland 100 back in the summer. In fact it wasn’t my preparations for the Spine Challenger that worried me, if anything a short break at this stage was probably a good idea. What really concerned me was my 2016 miles in 2016. Yes a trivial challenge I’d set myself back in January but one that after 11 months I’d hoped to finish.

Both my pre-Lakeland dose of flu and the 4-6 weeks recovery afterwards had put me well behind the curve on this challenge. However in recent months I’d slowly managed to pull this back and was well on track to complete my 2016 miles by early December, something I was pleased with considering the way I’d structured my year and the planned and enforced downtime I’d taken along the way.

As with all things you’re running to the wire, a stumble close to the finish gives you little room for manoeuvre and as I lay recovering I was busy doing the mental arthimetic. Was there enough time to make the miles back up and still complete it, while not breaking my body in the process?

Well the good news is yes, hopefully! As I write this there are 12 days running left in the year and I’ve 133 km left to run and 153km in my training plan between now and the end of the year. Its going to be close but with a fair wind at some point between Christmas and the New Year I will hopefully cross the line and tick this one off. I really hope so, as I don’t want to have to worry about running 2017 miles in 2017! 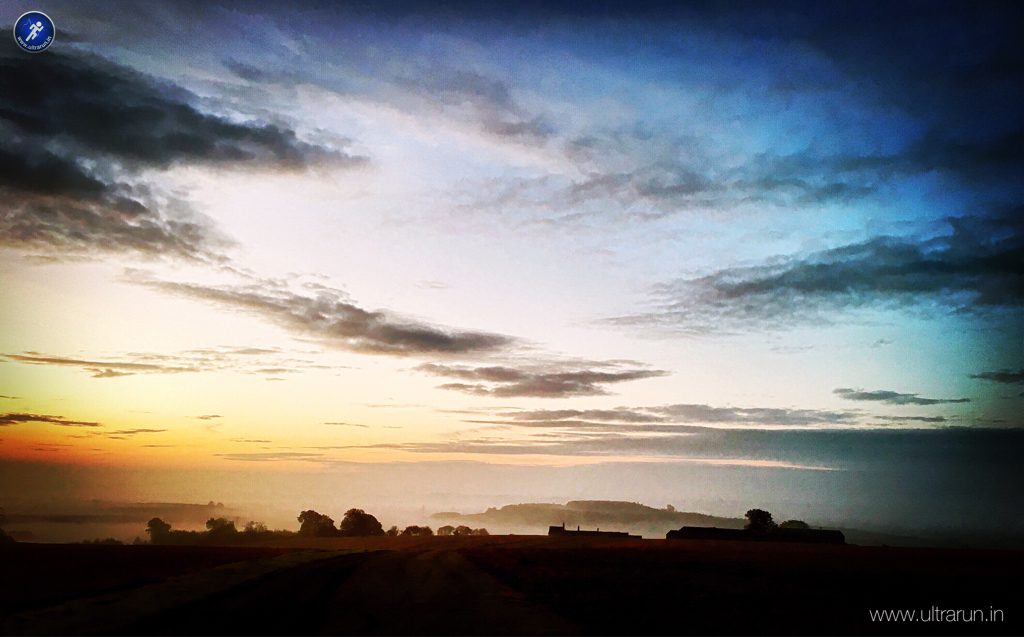 Back on The Trails

So back to my training. Following illness I was able to get back up and running a decent weekly mileage quite quickly. With the race approaching fast, I was now wearing my race pack for all my commuting runs. This was loaded with a combination of race kit and stuff I needed for the office, and would typically weigh 7-8kg, so comparable or maybe even slightly heavier than my race pack will be on the start line in Edale.

The volume was there and my legs were regaining their strength, which was great. My original plans to run one final ultra in 2016 as a dress rehearsal were quickly shelved. Instead I decided to focus on a combination of weighted miles and some intensity to get me to where I wanted to be. The Spine Challenger will be like no other ultra I’ve undertaken before and will less about running and more about general endurance and expedition skills, something I have a pretty decent amount of experience with.

So how do I feel about the last few months training now? All things considered its not been too bad and besides missing the chance for a final race, I’m fairly comfortable with where I’m at. Last week marked my final big week, covering just over 70 miles. From here on into the race itself I will be slowly pulling back the mileage, trying to retain the fitness I’ve gained and give my body a chance to recover and prepare. As usual, as my mileage drops I’ll be retaining my core and strength work, plus adding a little more intensity to keeps the levels up as best I can.

Kit choices – you can never have too much right?

I’ve made a lot progress with my kit choices in the last couple of months. There are still however a few final choices to make, predominently around clothing. With the weather so warm at the moment its impossible to get out and test different combinations of layers when running, to find the right balance between warmth and sweat management. During the short cold snap we had a few weeks ago I was able to try a few things out but I could still do with a nice cold week to really get this nailed down ahead of the race.

On a positive note, decisions on footwear and pack have been made. Despite a last minute wobble, I’ve decided to go with the OMM Classic 25. I’ve been happily using this on my commuter runs for the last few months. It works really well and while it sits a little high on me, it’s still both comfortable and stable when loaded up, which is my primary concern.

After trying a number of different options for a front pack, I’ve chosen the Salomon Custom Front Pocket. This combines comfort and stability, with flexible storage options, which will allow me easily access key items and navigation gear without having to remove my main pack. I’ve also added two OMM Go Pods to the front of my pack, which are more flexibile than the OMM water bottle holders in my opinion.

From a footwear perspective, I will be going with my tried and trusted Inov-8 Roclites. These will be combined with merino socks, running gaiters and also a waterproof boot liner if things are really wet underfoot. 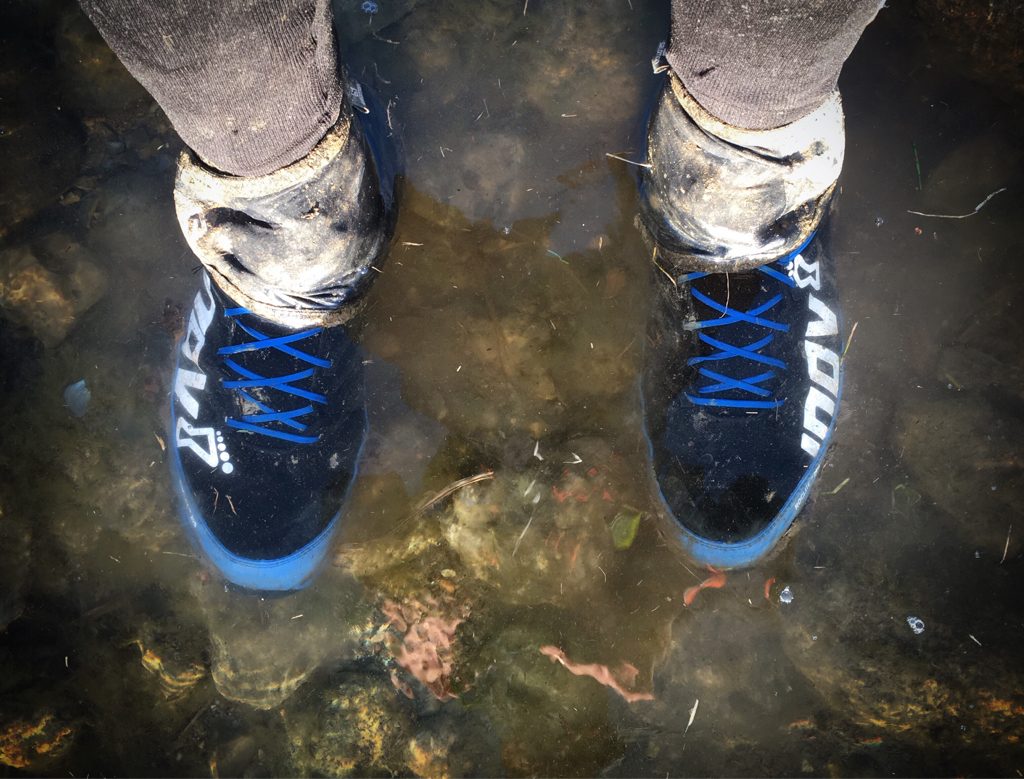 Immersion testing roclites
Foot care is definitely going to be key to my success on The Spine Challenger and I’m desperate to ensure there is no repeat of the trenchfoot issues I experienced during Lakeland 100. Its always going to be a toss up between wearing a waterproof liner or not. I tend to generate a lot of heat and while the liner produce damp feet, it does stop them soaking out entirely. Having tested these extensively on wet and muddy runs across the Fens, including total submersion standing in a few lakes and deeper puddles, I am happy with my choice. The final layer of defence will be smoothering my feet in Gurney Goo to keep any moisture out of the skin.

Friends to the rescue!

The final big news for The Spine Challenger is I now have a crew!

Following my last post, a couple of friends approached me and offered their services, which I was both honoured and extremely grateful to receive. Having a crew will totally transform the race and will make a massive difference to my plans for kit and nutrition both before and during the race.

Hopefully they will both get something from the experience as well and I’m sure I will be returning the favour for them at some point in the future. 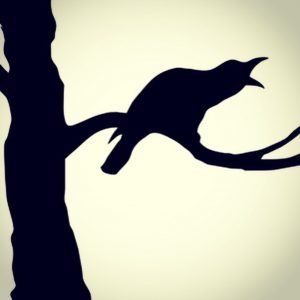 I’ve also added another race to my plans for 2017. This year saw the first running of Escape from Meriden by Beyond Marathon. This race is a self supported run along of a route of your choosing. All competitors start at midnight in Meriden in the West Midlands, UK and have 24 hours to get as far away from there as they can on foot. Prizes are awarded based on distance travelled as the crow flies, with the 90 mile mark being the aim for those after the coveted gold medal.

All competitors carry a RaceDrone tracker and watching this years event proved such addictive viewing that when entries opened for 2017 I had no hesitation in signing up.

At this stage I’ve put it to the back of my mind but once I get past Lakeland 100 next summer, I’m sure the maps will come out and I’ll start plotting my route in earnest. Next year a summer version of the race is also being run, so it will be interesting to follow and see the route choices taken here as well.

Last week I took the opportunity to launch a new look and feel for this website. The site had been running for over two years under its previous design and while still pretty good, it was definitely time for a refresh.

Since I first launched this website, I’ve really got into my photography while running and racing, and wanted a design that could make the most of this. Hopefully you’ll agree that the new design has achieved this but I’d love to hear any feedback you may have, both positive or negative, in the comments below.

Finally I am honoured to have once again been short-listed for both The Running Awards and Run Ultra Blogger of the year. Voting is still open for both of these and if you can spare a few moments to submit a vote for any of us on the list, it would be greatly appreciated.

Well that’s it from me. Just a few days until Christmas now and time yet to get some final miles into the legs before the eating marathon begins at the weekend. I hope you’ve had some great running experiences during 2016, and that you have a relaxing and enjoyable Christmas break.