Montane Spine Challenger – My 2017 Race of Highs and Lows!

Well it’s a little over 24 since I crossed the finishing line of The Montane Spine Challenger. I’ve managed to get some sleep – need some more! – clear my head slightly and start to sort myself out. A monster race report will be coming as usual but I felt it was worth getting a few thoughts down and thanks out now while my legs still ache.

Those that know me well, will know what a dark place I was in both physically and mentally as I stood on the start line on Saturday. Truth be told it was the last place I wanted or should have been and the race was effectively over before it even began.

What followed was a truly epic 52.5 hour adventure. Bit by bit, with the support of some amazing people, a traumatic experience slowly evolved into a journey of discovery and ultimate success. It definitely wasn’t the race I’d dreamt of during those months of planning and training but that made the personal achievement all the greater and I’ve probably learnt far more about myself than in any other race to date.

I have so many thanks and won’t be able to name check everybody but will try to cover as much as I can now. Firstly a huge thanks to everyone on social media who posted messages of support and followed along with John’s photo updates. As I write this I still have over 100 unread notifications. It will take me time to go through them all but I will. Rest assured that your support was being fed back to me during the race and it really helped move me forwards.

Special name checks have to go to Karen Doak and John Reynolds. Both your messages on Facebook before the race came at a point when I was at a real low point and lifted my spirits. So much so that I took screenshots of them with me on my phone so I could access them during the race if needed, Thanks Guys you are superstars as always!

Thanks if course to all my family, for their support and encouragement in the months before and during the race. I appreciate how stressful these kind of events can be for family watching from afar. Your love and support meant the world and I was driven on with a desire to make you proud of me.

I met so many great people during the race, not just the athletes but also their support crews and let’s not forget the team that makes the Spine Machine what it is. Every single one of them was enthusiastic with their support and encouragement, lifting spirits when it was needed.

Four people stand out amongst all others though and please indulge me further while I call them out.

Firstly to Andrew Haworth for taking the time to come out and meet me on Sunday. It was great to see a friendly face running towards me on Sunday morning, who then patiently listened to my grumbles without judgment. It was a great surprise and boost to then see you and Rachel later on in the day at Gargrave. I really appreciate you both taking the time to come out and your parting remark as I left Gargave was extremely motivational and really did the trick! 😀

Secondly my wife Leanne for her love, support and pep talks before and during the race by text, to lift my spirits and push me forwards. You are the person that not only knows me the best but also shares my pain when I am suffering, which I have been in the last week. It would have been easy for you to give into my wishes to stop but instead you drove me on. I know this was a massive sacrifice for you and I both love and apologise for that.

Thirdly Richard Martin. Ricky and I had met before at a couple of races and also crossed paths in the middle of the night just outside checkpoint 1 at Hebben Bridge. The following morning when we were both at our lowest point, our paths crossed once again and together we walked across the fields sharing our woes – sounds almost like some soppy love story doesn’t it!? As the hours passed we chatted, formed an informal team, then a plan and finally executed it perfectly to drag our sorry backsides all the way to the finish. Thanks mate, your company and support was brilliant and I could’t have done it without you!

Last but by no means least to John Figiel, my loyal crew for the race. When I entered the Spine Challenger I entered as an unsupported runner. Towards the end of last year John kindly offered his services as crew, I was extremely grateful for the support and took him up on his offer. With the patience of a Saint he put up with my moans and groans both before and during the race, gently encouraging me forward – or more firmly as required 😉 – and offering whatever support I needed. You are a total legend mate and it transformed the race having you there. In fact I’d go as far as saying that without your presence I doubt I would even have started, so for that fact alone you singly handled take the credit for getting me to the end! Thanks once again and I look forward to returning the favour for you in the future 😀

Well there we have it. What was supposed to be some quick thoughts and thanks turning into a bit of a ramble but I hope I covered everybody. Rest and recovery is what lies before me now before my next running adventure.

For now though I get to sit back and enjoy watching Mark Turner, Richard Ebbs and other true running legends make their way north beyond Hawes to the Scottish Border in the full Spine race. Total respect to you all for taking on the full distance of #britainsmostbrutal race.

UPDATED: January 29th, 2017
My full race report is now available to read. So if you want to get a blow by blow account of how the race unfolded for me, head over to My Race Report: The Spine Challenger 2017 – Part 1, Highs and Lows to Hebden.

I’ve also published my photos from the race, which you can see in My Photo Diary of The Montane Spine Challenger 2017. 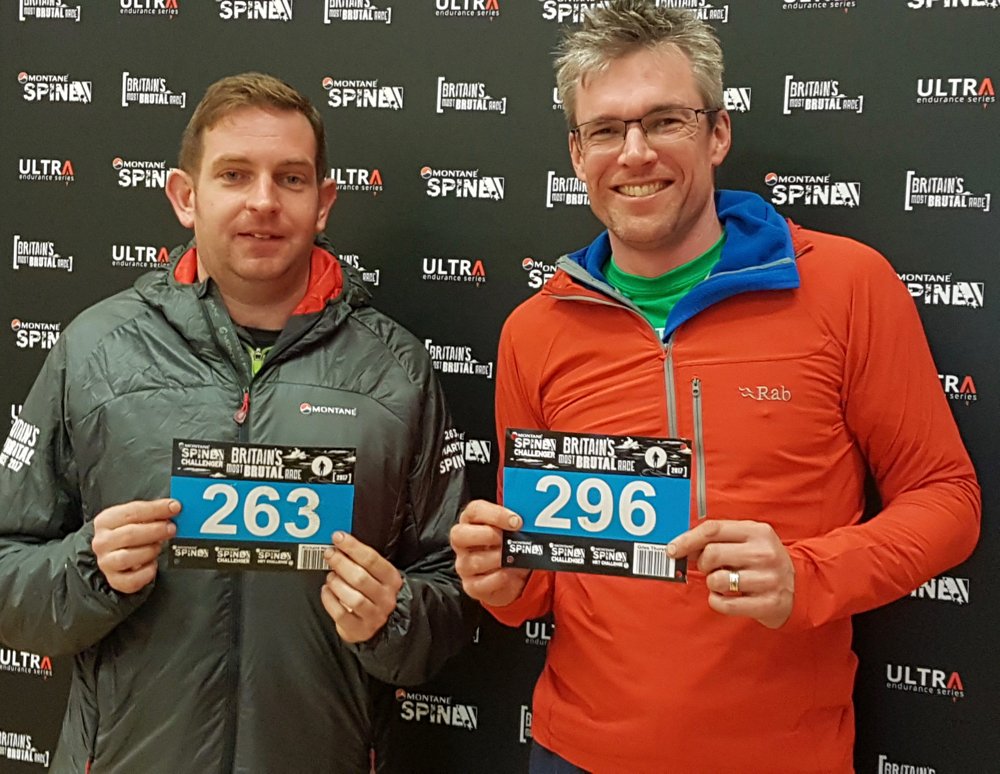 Ricky and Giles at the Spine Challenger Finish 2017