It has been a little over a month since my last update, and before I write my pre-race thoughts ahead of next weekends Pennine Barrier 50, I thought it would be worth giving a quick update on what I’ve been up to running wise.

Injury has cast a shadow over most things since my last post. I have been struggling with a lower abdominal strain or hip injury of some sort, and while I’ve been receiving treatment, an accurate diagnosis or prognosis is yet to be reached. The good news is that the injury has not really stopped me from running and with my physiotherapist’s blessing, I have been able to get some good mileage in, all be it with quite a bit of discomfort.

My primary concern is getting an accurate diagnosis and accessing what impact this could have on my participation at Lakeland 100 at the end of July. I have been referred onto a consultant and will likely be poked, prodded and scanned this way and that but I am hoping this will shed some light on the situation.

The aim of next weeks Pennine Barrier 50 was always going to be testing my body, fitness levels and kit, ahead of Lakeland 100. The former is even more important now and hopefully in the next few week things will become a little clearer.

Injury aside, I have still managed to get some good running in over the last couple of months, with a good blend of volume and intensity. This has included not only my usual blend of runs here in East Anglia but also some fabulous running adventures along the south coast, but more on those later. 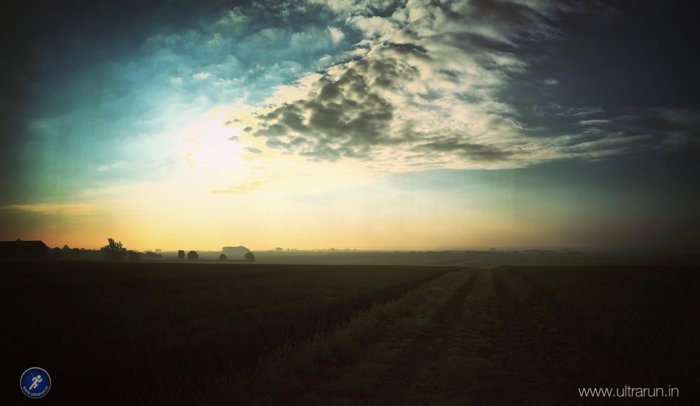 In the last couple of weeks I have been delighted to step off the race course and experience something new for me, namely providing crew support to others during a couple of races.

The first was for my lovely wife, as she undertook her first trail marathon in Devon, UK a couple of weekends ago. It was hard work but brilliant fun, dragging two young children around the course, trying to chase Lea down and give her all the support we could. She did brilliantly, returning from a long term foot injury herself, which played havoc with her race preparations, not the best confidence booster before your first marathon! I think we all agreed that one of the highlights of our week in Devon was seeing her running across the finish line. I am so proud of her and we are now officially a two runner family! 🙂 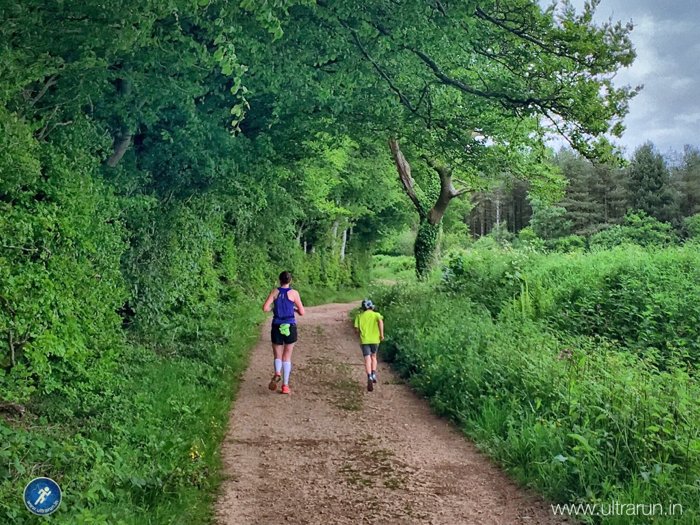 Five days later and I was back on the road driving towards Meriden with John Figiel to support him on his Escape from Meriden. John had provided invaluable crew support to me in this years Spine Challenger and I was excited to be able to return the favour and also get an insight into this race, which I am down to do myself in November.

This was the second running of this exciting event, where competitors have 24 hours to get as far from Meriden (the centre of England) as possible on foot. No support is provided by the race organisers Beyond Marathon after the start, or defined routes given, meaning that runners were heading in all directions from the word go. Medals are awarded for reaching 30, 60 or 90 miles, with most runners targeting the 60 or 90 mile medals.

My role was to leapfrog ten or so miles ahead of John in his camper van, providing him with food, nutrition and morale support throughout the day and night. It was raining hard at the start and this continued until dawn, after which the skies slowly cleared and the temperatures slowly climbed. 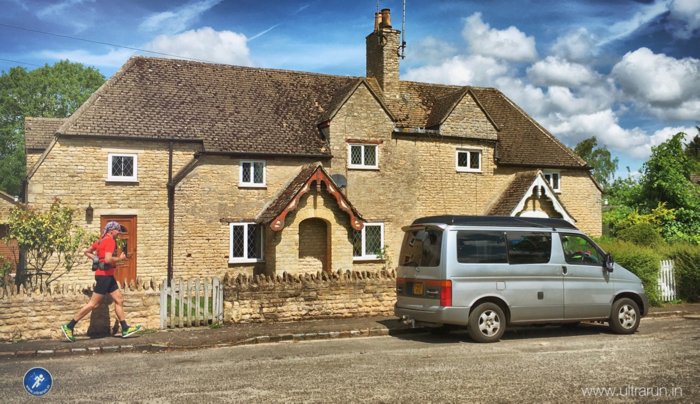 John arriving at the van during Escape from Meriden

The terrain underfoot was hard going, with many footpaths overgrown and totally un-runable. At dawn a new tactic was called for and after consulting the map we realised we could stick mainly to the roads with minimal detours from John’s original planned route. A new route was set and John changed his shoes and set off confidently under the clearing skies

This worked well and good progress was made. However by mid afternoon it was steaming hot and (reading other race reports) competitors were struggling across the country. John’s pace was dropping but he was still driving forward with real determination. However as he crossed the 60 mile mark just before tea time in central Peterborough, we realised that the 90 mile mark was out of reach by midnight and decided to call it a day. A difficult decision but the correct one, given the circumstances.

While it may not have been the conclusion John had hoped for, it was still an amazing effort in tricky conditions. Congratulations John, a superb effort! Hats off to you mate!

Crewing both races has given me a totally new perspective. It was fabulous to be involved in both events and play a small part in helping others achieve their goals. If you haven’t crewed before I would strongly recommend you do so, as it is a hugely rewarding activity. 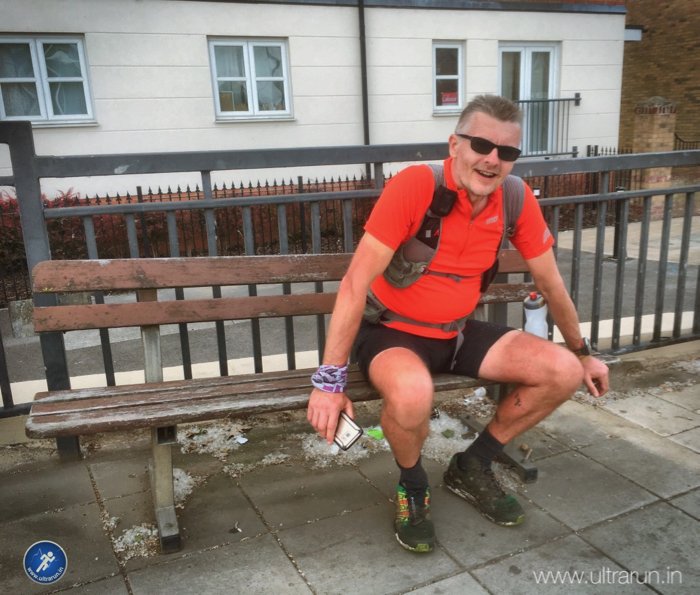 John at the finish of his Escape from Meriden

As an added bonus, due to the way we approached the support on Escape to Meriden I was able to combine my crew duties with getting some good running in myself. Once dawn arrived I would generally drive ahead of John and then run back along the course to meet him, putting some good tempo and hill efforts in on these legs to inject some intensity. I would then run/walk back to the van with John, hopefully providing support and helping to keep him motivated, before running ahead to prepare kit and nutrition for him.

By the end of the day I’d managed to get four runs in and covered just over 60km myself, with some nice intensity in there too. Not an all in one effort but it was good to be able to fit my own multi-stage ultra into the day, while supporting John at the same time.

During our week in Devon, with the support of my family, I was also able to take advantage of the terrain and get some hills into my legs, in preparation for the Pennine Barrier 50 and (hopefully) Lakeland 100.

Two sessions really stood out, with a good paced half marathon effort, mostly off road and with over 500m of ascent earlier in the week. This was then followed later in the week by an ultra-paced 25km along the South West Coastal Path, under the blazing sun. 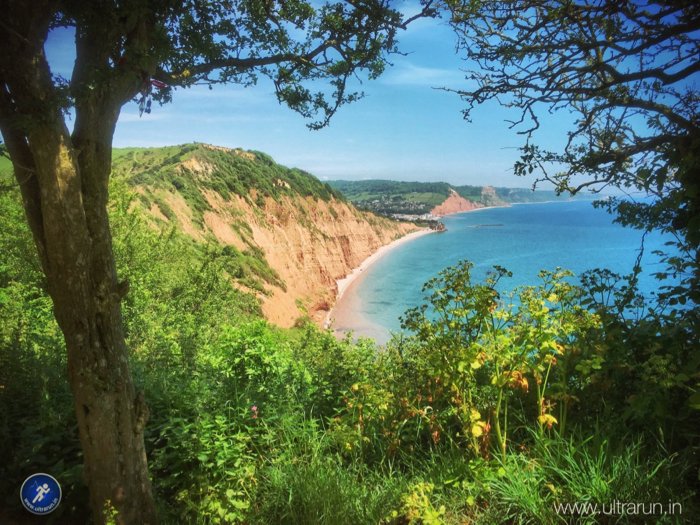 That day started well and I made excellent progress from Salterton to Sidmouth, retracing part of the route of my wife’s marathon earlier in the week. After Sidmouth the famous cliffs on the South West Coastal Path really took control and it was hard work to make good progress in the heat. As I finally approached Branscombe Bay I was out of water, worrying I’d over cooked things slightly in the heat and was considering calling in a pick-up from my family. However with only 1% phone battery left and no phone signal anyway, I had no choice but to push onto to Beer and my intended finish.

The beach shop proved my salvation and 1.5 litres of ice cold water later, I was running across the car park with a double scoop ice cream cone in my hand and beginning my ascent back onto the cliff tops. I must have looked a strange sight! 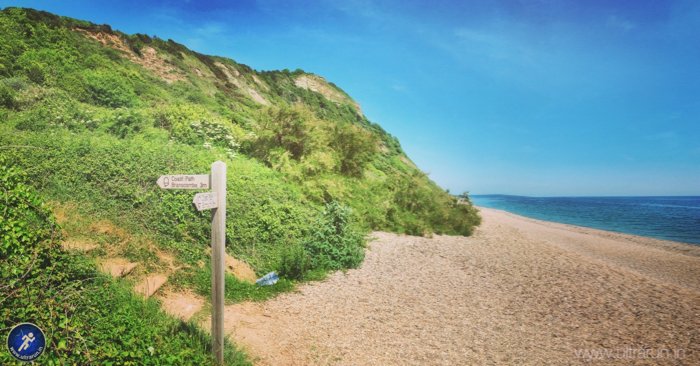 The refreshments did the trick and I made short work of the final few miles into Beer, celebrating with a plunge into the icy waters of the English Channel and fish and chips on the beach with my family. It was hot work but definitely worth it, with some stunning views along the coast, while loading another thousand metres of ascent and decent into my legs.

Finally, while Lakeland 100 is my main running goal in 2017, I have already started planning my attempt at the full Spine race in January 2018.

To aid with my preparations for this, I have just signed up for The Rebellion Ultra in early November, a 135 mile race along The Glyndŵr’s Way National Trail in Central Wales.

What attracted me to this race, other than the interesting route, is that the checkpoints are a similar distance apart to those on The Spine, with a comparable kit list as well. Although it is only just over two months out from The Spine itself, my plan is to treat this as a long training run, holding back on the effort levels and instead focusing on getting my kit, nutrition and race admin nailed down.

As The Spine will be unsupported this year, these elements will be critical to my success (or failure) and hopefully this approach will allow me to head confidently into 2018.

So it has been a busy last few weeks running wise.

While injury problems have been playing on my mind, I have still managed to hit all of my running goals and make the most of the opportunities around me to prepare for my upcoming races. It has been both a total pleasure and hugely rewarding experience to support Lea and John on their recent running adventures, motivating me on my journey towards my own running goals in 2017.

I’ll be back in the next few days with some specific thoughts on my next race, The Pennine Barrier 50. Until then, I hope you are making the most of the great weather and getting out and enjoying your own running adventures.